Go back to articles

All aboard for new recruits in ambassador program 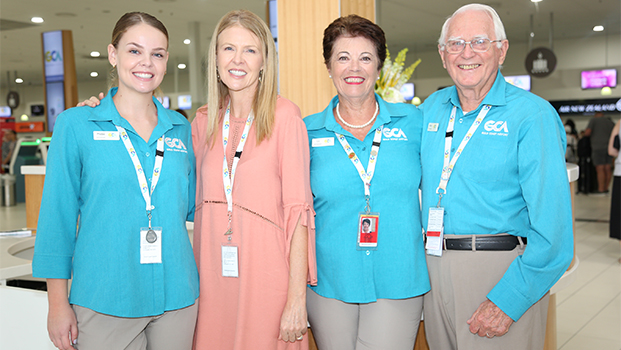 From a former US Air Force worker to a retired airline steward from the early days of air travel, Gold Coast Airport’s volunteer ambassador program is continuing to go from strength to strength.

The latest round of recruitment has recently concluded with a total of 75 volunteers now giving their time to assist visitors to the airport, completing 90 shifts – or the equivalent of 360 customer service hours – across the week.

Gold Coast Airport Chief Operating Officer Marion Charlton said she was delighted to welcome the new recruits to the fold – many of whom are just completing their first shifts – thanking them and their team for their time and commitment.

“We first established our ambassador program in the lead up to the Commonwealth Games and were so thrilled with the success and popularity of the program, we decided to keep it going,” she said.

“We started the program back in November 2016 with 29 ambassadors and are proud to say 26 of them are still with us today, helping to pass on their expertise to our latest recruits.

“Our volunteers tell us they love coming to the airport each week as the role is so dynamic and changes every day, while for us, they provide a wonderful connection to the community.

“They have become the face of the airport and are a major contributor to our customer service success.”

Gold Coast Airport was recently awarded the Best Regional Airport in the Australia-Pacific region, as well as the Best Service Staff in the region at last month’s Skytrax World Airport Awards.

The ambassador program is delivered in partnership with Volunteering Services Australia, with extensive training provided on an ongoing basis, in areas including workplace health and safety, fire training, customer service and training with Border Force.

Based at the Information Desk in the check-in hall, the ambassadors are highly visible and often the first point of call for passengers, helping to answer their queries on everything from flights to lost goods. They are also involved in all terminal activities such as Australia Day, Easter and Christmas festivities, including dressing up as Mr and Mrs Claus.

The group – with ages ranging from 19 to 84 years old – includes people from all walks of life, including former teachers, nurses, airline stewards, an ex-beauty salon owner and a former US Air Force worker. There are a couple of husband and wife duos, as well as a mother and daughter pairing.

The ambassador program was extended last December to include the AmbassaPaw program, with therapy dog Gary, the golden retriever cross. Gary’s handler is another ambassador – Tom Meath – a former US Air Force office worker who has volunteered at the airport for two years.

“Being a retiree, I was looking for something worthwhile to do with some of my spare time,” he said.

“I was lucky enough to be selected as a handler for our AmbassaPaw, Gary. The first day we had our new therapy dog on deck at the airport was really special. He brings so much joy to both the flying public and to airport staff that it makes every day we are here extremely special.”

Another volunteer, retired recruitment manager Elizabeth Whitney, joined the team eight months ago, after working as a Game Shaper at the Commonwealth Games.

“I’ve been an ambassador for eight months, but I feel that I have been there for much longer,” she said.

“I just love coming to work to see what’s in stall for the day as each shift is different from the others.  I love talking to the passengers, hearing their stories albeit good or bad and having a good laugh with them and the wonderful people I work with.

“My highlight is without doubt Gary and just watching the passengers interacting with him, especially the children.”

To add your name to the waiting list for our ambassador program, email ambassadors@gcal.com.au

Some feedback from our passengers:

- 'Hey, I just wanted to give my thanks to one of your customer service staff members that helped me today (12 September 2018) – Jim. He was so, so lovely in helping me when I missed my flight, running around asking airline staff for the best option. He didn’t leave my side until I was happy and checked into my new flight! Was so lovely to have such a nice comforting experience. I know you would get a lot of complaints on here, so I really wanted to share how lovely and warm your staff member was. Thanks so much.’ – Alieda

- 'Wish to acknowledge two fine Gold Coast Ambassadors on duty today. Jim and Annette were so immediate and pleasant in directing us to the right area, then checking on us again later. Great to have this service.' – Wendy Dalton

- 'Many thanks to your volunteers (especially Jeff) at the airport who made life so much easier for a couple of us older travellers.' – roxmac@iinet.au